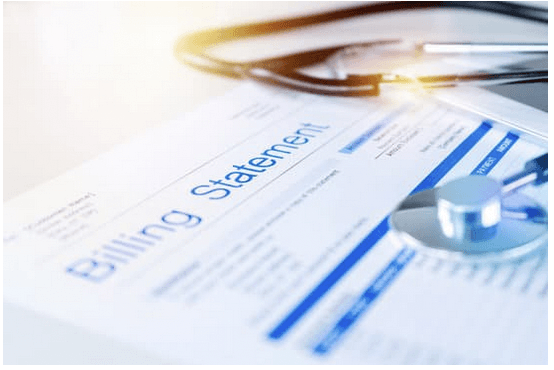 “In March of 2020, my eight-year-old son, Owen, got really sick. He was dropping weight, and had fevers every day, and we were trying to figure out what was wrong. You probably noticed the month and date—it was right at the beginning of COVID. My wife, who was a school nurse at the time, was sent home with other teachers and essentially stopped working. She couldn’t work when Owen was sick—someone had to be there to take care of him—and with COVID it wasn’t worth it. So suddenly we were a single-income household.

As part of the diagnosing process, Owen had surgery to remove a lymph node above his collarbone. His doctors had a bunch of pathologists look at it, including a company who for the purposes of this story we’ll call the “Frustrating Company” or FC. Fast forward through the next year, he gets diagnosed with Hodgkin’s Lymphoma and we go through five rounds of chemo.

Luckily, the first time we were contacted by FC was a year later when we were out of the scary time with Owen. In May of 2021, FC sent a substantial bill to our home addressed to Owen. Owen, you remember, was eight years old. I called FC to discuss this, but they refused to talk to me about the bill because I wasn’t Owen. Can you believe that? I had to explain, ‘Owen is eight years old and I am his father!’ but the company said I wasn’t a legitimate representative for Owen. I had to work with them to switch the name from Owen to mine in their system, which took them a month.

In the meantime, I dug into this bill with our insurer and it turns out they denied payment to FC because FC sent in their bill way, way too late— like seven months after the initial lab. So instead of just accepting their mistake and eating the charge, FC started billing us instead. I talked to multiple people at my insurer and at FC over months and months and got no traction at all. The insurer wouldn’t pay the bill; FC wouldn’t stop billing us.

Then I received one of those bills with the red font from FC that said, ‘We’ve attempted to bill you several times and if we don’t hear from you within 15 business days, we’ll send this bill to collections.’ I just lost it— I screamed at them on the phone. I was just done. No one was helping us. No one would talk to me, give me answers, or budge on it.

I was just lost at this point.

I literally didn’t know where else I could go with this anymore.

I finally contacted Cancer Legal Care. I didn’t know what CLC could do, but at least I could get someone with letterhead to say, ‘Hey guys, we’re not messing around anymore.’ I connected with Erin (ICARE Manager and Senior Staff Attorney), and she got all of the info and immediately started contacting them.

I was able to finally put this on the back burner.

Taking that pressure off of us was the greatest feeling after going through all of that stress.

It’s so hard to explain how great that felt. I had so much else going on, including worrying about my eight-year-old son. When I handed this off to Erin she said, ‘We’ve got it’ and the back of my shoulders released. To know that she was going to dig into it, and that they were going to contact her, not me, made the whole situation so much easier to deal with.

This company was so tough that Erin spent five months pushing at this. If it took her that long to deal with it, I can’t imagine what my life would have been like or how long it would have taken me. She finally wrote up a letter—and it was a fantastic read—and outlined every conversation she had had with every person there and sent it to their president. A week later we got a reply that said, ‘You’ll never be billed again, and we apologize for the inconvenience.’ It was put to rest at that point.

My wife and I talked a lot about how much money this would have cost if we had tried to go to a private lawyer. It was so much work, and lawyers aren’t cheap. We couldn’t have afforded it. The money involved would have been so ridiculous.

To people thinking about reaching out to CLC for help, I’d say: do not hesitate to ask. You can literally just call and ask a question, even if you think it’s a stupid question. They’ll tell you the right answer so you know the right direction to go. When I contacted CLC, all I was looking for was for Erin to send one letter with letterhead saying ‘I’m his lawyer, stop contacting him.’ That’s all I was looking for, and then she went above and beyond to resolve this.

To people considering a donation to CLC, I’d say: this group is wonderful. From a patient/family perspective, having the free legal work and free legal advice available to people like us was huge. We felt comfortable contacting CLC with questions and not worrying about ‘Oh this is going to cost us umpteenth dollars… do I really want to contact them?’ To be able to just call was such a relief, and a stress reliever overall.

To anyone who’s thinking about donating, I can say from direct experience as a family member who has dealt with this: CLC’s work is such a huge positive.”